There are 11 genera and about 70 species of dragons (Agamidae) in Australia.

The adult Bearded and Water Dragon are easily identified. Jacky, Nobby and Mountain Dragons are harder to distinguish from one another.

One way that helps in distinguishing between local dragons is to know the relative sizes of local species. A standard measurement in the description of reptiles is the snout-vent length (SVL) which is measured from the tip of the nose (snout) to the anus (vent), and excludes the tail. For example the SVL of the Grassland Earless Dragon is 55mm, the Mountain Dragon 82mm, Nobbi 84mm, Jacky 120mm, Beardy 245mm, and Water Dragon 250mm.

Knowing the habitat and distribution may also be helpful in the field. Bearded Dragons are widespread in lower lying country. Water Dragons are never far from a rocky-watery habitat, as their name suggests. Likewise, Grassland Earless Dragons are confined in native grasslands. Jacky Dragons are widespread. Mountain and Nobbi Dragons are habitat specialists. The former is found in very high altitudes and the later seems to prefer rocky escarpment areas along major rivers.

Subtle differences in back markings, colour, size, spines along tail, mouth colour, habitat and behaviour help to distinguish Jacky, Nobbi and Mountain Dragons from each other. Different authors point to subtle differences in back markings to distinguish species, but this is difficult diagnostic characteristic. Each species is grey in colour but the Mountain Dragon is a little more brownish. In the breeding season the male Mountain Dragon develops a distinctive reddish hue. The Mountain Dragon has distinctive spikes (spinose scales) along the sides of the base of its tail; the Jacky and Nobbi do not. Mountain Dragons burrow and partially bury themselves, possibly to regulate temperature; the Nobbi and Jacky do not. The Mountain Dragon is less likely to climb onto rocks in open areas, it tends to remain in leaf litter and rarely breaks from cover. The Jacky is known to climb shrubs and trees. The Jacky has a bright yellow tongue and mouth which it appears to use to frighten off predators and to assert dominance; the Mountain Dragon has a yellow tongue and blue mouth and the Nobbi has a pink tongue and mouth.

Young Bearded Dragons also look like Jacky, Mountain and Nobbi Dragons but may be distinguished by the presence of lateral (side) spines which are absent from the other three species. 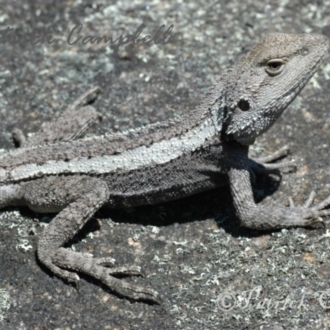 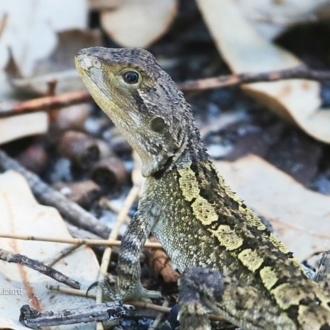 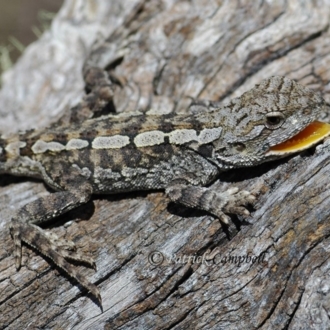 Become the first moderator for Dragons!